This is Carlos.  He comes to our Saturday night Bible studies almost every week.  He’s never on time, but if he doesn’t show up, I get worried about him.  He always has on the same clothes.  Usually his hair is mess 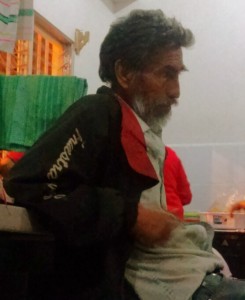 ed up.  I have a hard time understanding him when he talks because he is missing quite a few teeth.  I could say a lot of things about Carlos, but let’s just say that he’s a unique guy.

He used to come to our Saturday night Bible studies and sit by the wall, so that he could lean up against it, and sleep.  Which is ok, because if he needs a safe place to crash for a while, why not with us?

Sometimes someone’s growth just kind of sneaks up on you.  That happened to me this week with Carlos.  When he came in this week, his clothes were the same, but his hair was combed.  He listened to Jorge’s message.  He answered questions.  He hugged a girl who was celebrating her birthday.  He contributed to the offering.

I hate to even point that out, but that’s what got to me the most.  I mean, this guy, who doesn’t really have anything to give, gave.  That all by itself is remarkable.   The thing that means the most to me, though, is that Carlos has been a part of us for a long time and he is finally figuring out that he belongs.

We all come to God with baggage.  Some of us come with just a carry-on.  Some of us with a carry-on, a personal item, and 27 checked bags.  The differences between the two might seem like a lot to us, but to God, there is no difference.

We all start out the same way but the path to God is the same for everyone.  In the Bible, Colossians says,  “It was through what his Son did that God cleared a path for everything to come to him—all things in heaven and on earth—for Christ’s death on the cross has made peace with God for all by his blood.  This includes you who were once so far away from God. You were his enemies and hated him and were separated from him by your evil thoughts and actions, yet now he has brought you back as his friends.  He has done this through the death on the cross of his own human body, and now as a result Christ has brought you into the very presence of God, and you are standing there before him with nothing left against you—nothing left that he could even chide you for;  the only condition is that you fully believe the Truth, standing in it steadfast and firm, strong in the Lord, convinced of the Good News that Jesus died for you, and never shifting from trusting him to save you. This is the wonderful news that came to each of you and is now spreading all over the world.”