Today I brought Jorge and Julia into the hospital for Julia’s cancer treatment.  I usually drop them off at the cancer building (today we were there at about 5:00) then I go find a place in the hospital complex to park and sleep for a while.  Usually around 6:30 I get chased away by taxi drivers or people wanting to sell tortillas on the sidewalk I am parking in front of, so I head over to McDonald’s which opens at 6:00.  There, I can study and prepare for the weeks Bible studies.

Today, as I sit at McDonalds, I can’t get the story of Job out of my head. God’s intent with Job was to bring honor and glory to Himself.  Satan’s intent with Job was to steal from God the honor and glory that belongs only to Him.  I find it interesting to see that God is the one who brought Job up, not Satan.  God is a great strategist.  God knew before Job was ever born that the day of his testing would come, and He gave it to Job because He knew that Job would be better because of it.  God knew how Job would react when tested.  God knew that in the end He would get the honor from the life of Job and that Satan would once again be defeated.  If you haven’t read the story of Job lately, I encourage you to take some time and read it.

Today, as I sit at McDonalds, I can’t get the story of Jorge and Julia out of my head.  I see parallels between the testing of Job and the testing of Julia.  Jorge and Julia are “upright”.  Their lives are bringing honor and glory to God.  They are fulfilling the commands to love God, love your neighbor and make disciples.  I don’t think Satan likes what’s happening in Jocotenango.

I picture God having a conversation with Satan kind of like He did in Job 1, and it might go something like this. “Have you seen my servants Jorge and Julia?  They are doing some good work down there in Jocotenango.  My name and my Son are being honored because of them.”  Satan might reply, “Yes, but only because you provide for them and protect them, if you ‘stretched out your hand against them,’ they would curse you and turn their backs on you.”  God might reply, “Okay then, go for it.”

That day Julia finds a tumor in her breast.  A week later Julia’s pregnancy test comes back positive.  A few weeks later, breast cancer is confirmed,  after that, a miscarriage.  They are being tested.

The decorations in their house are sparse.  There is a faded picture of their family printed on an inkjet printer on one wall.  There is a wooden cross and a wooden Star of David that were made by Julia’s dad.  There are two handwritten pieces of paper taped to the wall.  Those papers, 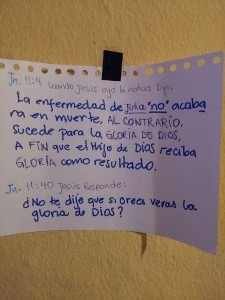 however, are more declaration than decoration.  They are verses and a little bit of commentary, the verse in the picture here (the other is at the end of this blog) is from the story of Lazarus.  John 11:40.   That verse talks about seeing the glory of God.  That’s really all they are after.  Of course Julia wants to live, but if you talk to her, you will become acutely aware that her life has a higher purpose than just… living.  That purpose is to bring honor and glory to God, whatever the circumstances.  As an example, one time when I picked them up from the hospital, I asked how things went.  They said it was great!  What I meant by my question was I wanted to know what the doctors said.  They said it was great because they had the opportunity to pray and comfort other people in the waiting rooms at the hospital.  When they looked at a waiting room full of people, they didn’t see the people as obstacles between them and the doctor (like I probably would have).  They saw a room full of people in need and they took the opportunity to meet those needs.

In the story of Job, Satan thought he was being clever.  He thought he would experience a victory through the testing of Job.  Like I said before, God is a great “strategist” (I am sure “being omniscient” helps with that.)  We can read the end of the book of Job and see that God was glorified through the whole thing.

In the story of Julia, I am sure that Satan thinks he is being clever with Julia.  He thinks he will experience a victory through her testing.  He thinks God will be dishonored.  He thinks their ministry won’t be able to survive this.  Satan’s plan will be thwarted.  God’s plan will prevail and whatever happens to Julia, God will be glorified through the whole thing.  Keep Jorge, Julia, Keren, and Claudio (their kids) in your prayers.  The test is just beginning.

Are there lessons we could learn from this?